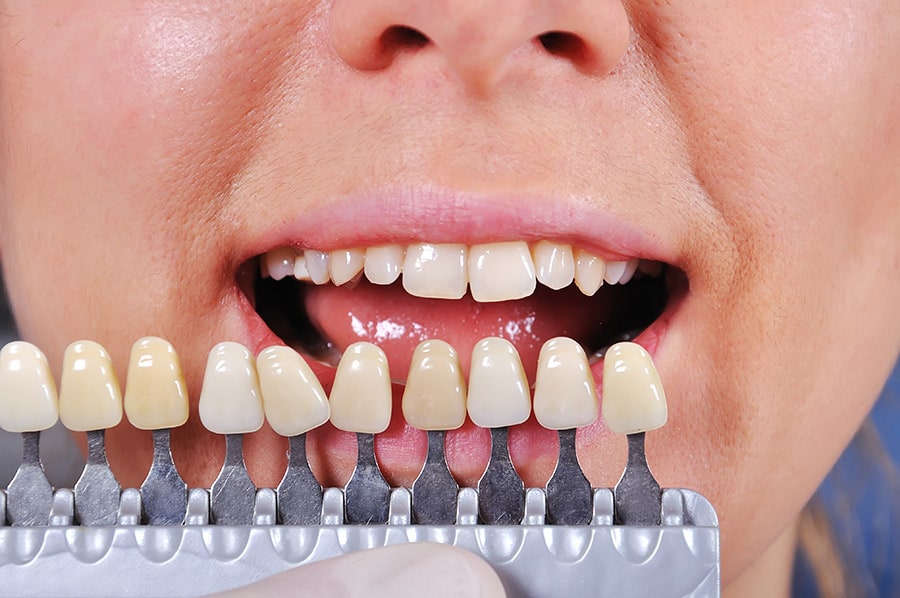 Some people may develop self-consciousness when they have unusually large teeth. This is most common in the front teeth that are generally the most visible. This is merely one of many cosmetic dental concerns. According to the American Association of Orthodontists (AAO), approximately 30% of American adults are unhappy with the appearance of their teeth.

Young adults are the most dissatisfied with their teeth, as nearly half of those between the ages of 18 and 24 have some complaints. AAO data further revealed that 77% of women are more concerned with the appearance of a man’s teeth compared to problems with hair loss. Fortunately, the vast majority of dental problems can be remedied by seeking professional treatment.

When the condition involves one larger tooth it is considered as isolated macrodontia. This is the least common form of the condition. It is more common among men and is most likely the result of either genetics or various environmental factors.

Those who have somewhat larger teeth coupled with a smaller than average jaw are said to have relatively generalized macrodontia. Although the person’s teeth are only slightly larger than normal, they appear disproportional compared to their smaller sized jaw.

This condition is not attributed to any single factor. Some of the most common causes are as follows:

Those who develop this condition are encouraged to visit their dentist. The dentist will likely examine your teeth and may have X-rays taken as part of an assessment. Following a diagnosis, a course of treatment can be specified.

In some cases, people with larger than average teeth can experience problems with teeth that merge too closely to one another. This makes cleaning between them more difficult, which may lead to tooth decay and related problems. The Journal of Contemporary Dental Practice explained that often treatment is not necessary for those with enlarged teeth when the problem is determined to be exclusively cosmetic.

Orthodontics is a field of dental care that seeks to correct teeth and jaws that are not properly in position. This type of treatment can straighten or align your teeth and “expand” your jaw if needed. A palate extender is a device that can allow your teeth to fit properly. Braces and retainers are also often used. Widening the jaw and straightening the teeth may improve spacing between teeth, which often causes them to appear smaller.

One alternative to metal braces is Invisalign. This is a form of orthodontic treatment that is more discreet and more visually appealing compared to metal braces. Customized aligners that are clear are used to straighten the teeth.

One option for treating macrodontia is a cosmetic procedure called teeth shaving, which is also often called re-contouring. This involves a device that will sand the tooth and reduce its size. The result is a slightly smaller tooth that may improve visual appearance. Shaving is often used for the side or canine teeth.

This is generally an option for those that have strong and healthy teeth. The practitioner may take an X-ray to help in making this determination. If the teeth are too weak, shaving them may expose the inner layers of the tooth and result in damage. In many cases, shaving a tooth will increase sensitivity and the possibility of decay.

One alternative to shaving is to restructure the tooth using veneers. This option may involve extracting some parts of a tooth and applying a new veneer cover. The material used is both durable and looks good.

It is important to remember that often the front middle teeth may appear large because the adjacent teeth are simply too small. These small teeth could potentially be enlarged to make the overall appearance more proportional. This enlargement may be done by using veneers or crowns to cover and expand the size of those teeth.

When the teeth become too crowded together, tooth removal (extraction) may be an option. In some cases, your dental professional may consider extracting the large teeth and replacing them with some alternative such as dentures.

Jaw Position and Your Bite

People with larger than average front teeth may potentially have a bite that is unhealthy. Your dentist will be able to evaluate the existence of and the severity of the problem. One example is that the jaw may rest in an unhealthy position and create potential long-term conditions.

The experienced team at East Valley Dental Professionals has been providing effective dental services in the Mesa region for many years. We have the knowledge and experience to care for the entire family with general, cosmetic, and many other dental services. We encourage you to contact our office today at (480) 838-3033 for an appointment.