Invisalign vs Braces: Which is Better? | Arizona Cosmetic Dentist Skip to content

Invisalign vs. Braces: Which is Better? 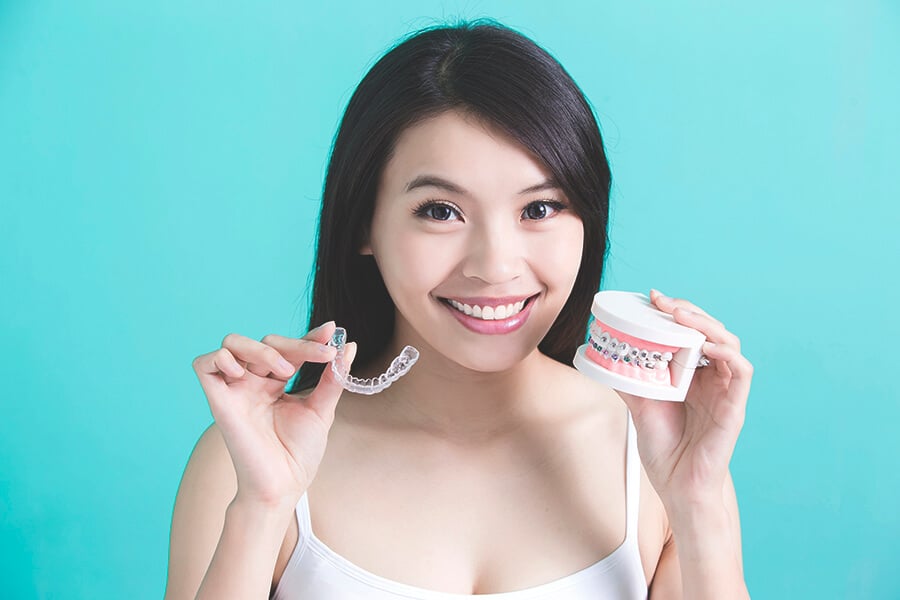 According to the American Association of Orthodontists, approximately four million Americans wear dental braces annually. Using orthodontic devices to straighten teeth surged beginning in the 1980s. Between 1982 and 2008, the number of people wearing braces nearly doubled. The traditional dental braces featured stainless steel supports fastened by thick wires that were tightened to adjust the teeth.

Dental braces are used for cosmetic or structural purposes. The term malocclusion is used to define teeth that are improperly aligned. Common problems with alignment include overbites, underbites, and other abnormalities. One widely used alternative to the stainless steel braces is Invisalign, a clear system that has been used by more than seven million people worldwide.

The Invisalign system uses see-through “dental trays.” The system was created by Align Technology, based in San Jose, California. Sales of the product for 2017 totaled roughly $1.47 billion. Clear aligning systems comprise about 15% of the overall market.

Certain problems that are more complex are best treated with conventional braces. Although Invisalign is tailored specifically, it tends to be less effective in patients with severe abnormalities. An oral health professional is best able to determine and present your available options.

One primary advantage of the Invisalign system is that it allows the patient to retain a more natural look than metal braces. Invisalign is commonly referred to as being “virtually invisible, discreet or inconspicuous.” The material used is a “BPA-free” form of plastic.

Unlike conventional braces, the aligners used for Invisalign are removable. Invisalign wearers can remove the aligners before eating and for cleaning. Failing to properly clean the Invisalign trays can lead to staining and discoloration. Those being treated with Invisalign must wear them at least 22 hours per day for the best results.

Those with conventional braces typically will clean them whenever they eat using brushes or other devices. Braces tend to retain particles such as plague that can cause tooth decay. Those wearing conventional braces are advised to avoid consumption of items that are crunchy, sticky or filled with sugar.

Many individuals experience tooth sensitivity or tenderness after braces are initially installed. The metal wires and brackets may also potentially create sores, cracks or other forms of irritation. Conventional braces also commonly require that elastic bands be used also. Some of those wearing conventional braces complain of difficulties with eating and with difficulty speaking in rare cases.

Braces generally need reevaluated and possibly need tightening every six to eight weeks. Consuming hard or sticky foods can cause wires or brackets to be damaged and require an office visit for repair.

Dental insurance may or may not provide some coverage for realignment options such as braces or Invisalign. The treatment is largely an aesthetic concern, meaning that insurers will deem the process as not medically necessary. The following facts pertain to the costs of these treatments:

Invisalign is typically used for a shorter duration than conventional braces. It should be noted that many severe cases of misalignment require that conventional braces be used. In these cases, it is logical to expect that the duration needed for correction will be lengthy. Treatment with Invisalign tends to take from 10 to 24 months based on dental problems.

Both options will typically require that a retainer be worn after treatment. This is to ensure the alignment is properly maintained.

Importance of Seeking a Professional Assessment

Individuals that are considering treatment for dental misalignment and related problems should consult with a professional. This will ensure that the unique structure of your teeth is examined and a proper diagnosis is made. This process may involve models, X-rays, and other tools that will aid in identifying the potential customized solutions.

For many years now, East Valley Dental Professionals (EVDP) has been providing superior care for their patients. The practice is extremely comprehensive and offers treatment options for the entire family. We encourage you to contact our friendly staff today at (480) 838-3033 for an appointment.